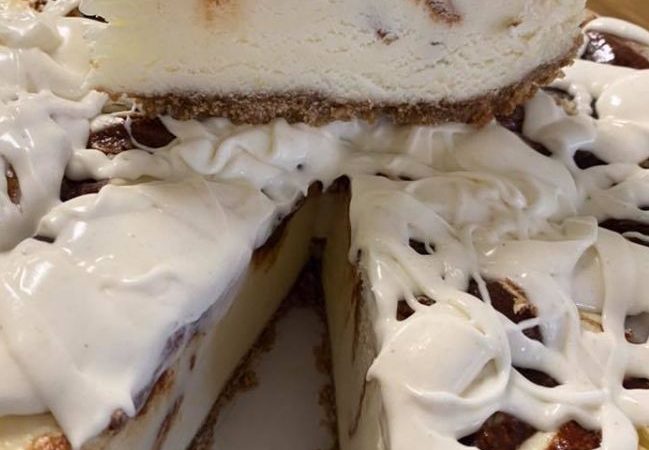 Luscious Vanilla Cheesecake is swirled with an ooey gooey cinnamon swirl topped with fresh whipped cream and berries this Cinnamon Roll Cheesecake is unforgettable perfect for your next party or special occasion!

Grease a 9-inch springform pan set aside. Preheat oven to 350F/180C. In a small bowl combine Oreos, melted butter, and cinnamon. Press into bottom and slightly up upsides of prepared pan. Place in fridge while you make the cheesecake.

In the bowl of an electric mixer fitted with a paddle attachment beat cream cheese for 3 minutes on medium to high speed. Add brown sugar and beat for another 3 minutes. Add heavy cream, Greek yogurt, and vanilla extract- mixing until fully combined. Add in eggs one at a time. You should have a creamy batter with no lumps. Pour into prepared pan. Place 9-inch springform pan in a 10-inch cake pan- place cake pan in roasting pan and fill roasting pan with hot water halfway up the sides of the cake pan. This prevents ANY water from getting in the cheesecake and you don’t have to wrap everything with foil.

In a small cup add cornstarch and a splash of cold water, mixing with a fork quickly to create a “slurry”.
In a small bowl combine the melted butter, brown sugar and ground cinnamon then whisk in slurry.
Spoon dollops all over the cheesecake and using a knife swirl all over.
Bake for 60 to 70 minutes, until the middle of the cheesecake, should jiggle just a little bit. Turn oven off and let cool in oven for 1 hour then take out of roasting pan and wrap with plastic wrap. Let sit in the fridge overnight.
The next day take the cheesecake out of the fridge and using a hot clean knife cut slices of cheesecake, pour a few tablespoons or however much you like on top of each slice of cheesecake.