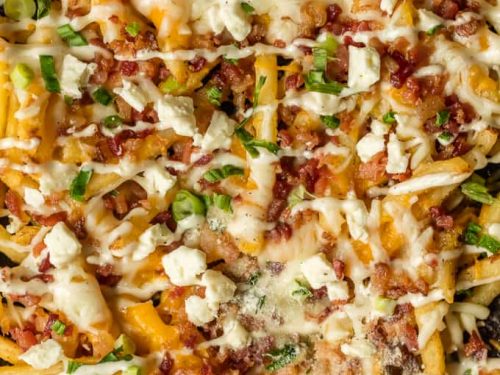 “More please!” You might as well double the recipe because these loaded fries will be devoured in minutes! This recipe is featured in the Idaho Potato Commission’s Big Idaho Potato Truck television commercial, and folks across the country have been clamoring for the recipe. This easy to make side dish starts with baked Grown In Idaho crinkle-cut fries. Once they’re golden brown, top with shredded sharp cheddar, bacon, sour cream (or ranch dressing) and serve with a big squirt of ketchup on the side!

Directions:
Heat oven to 425°F. Grease a rimmed baking sheet or large cast-iron skillet with cooking spray.
Spread out crinkle-cut french fries in an even layer on the prepared baking sheet.
Bake 25 to 30 minutes, until crispy and golden brown.
Sprinkle the fries evenly with cheese. Bake for 3 to 5 minutes until the cheese is melted.
Remove from the oven and sprinkle with the bacon.
Drizzle with the sour cream or ranch dressing, then sprinkle with the sliced green onions.
Serve immediately with ketchup on the side.