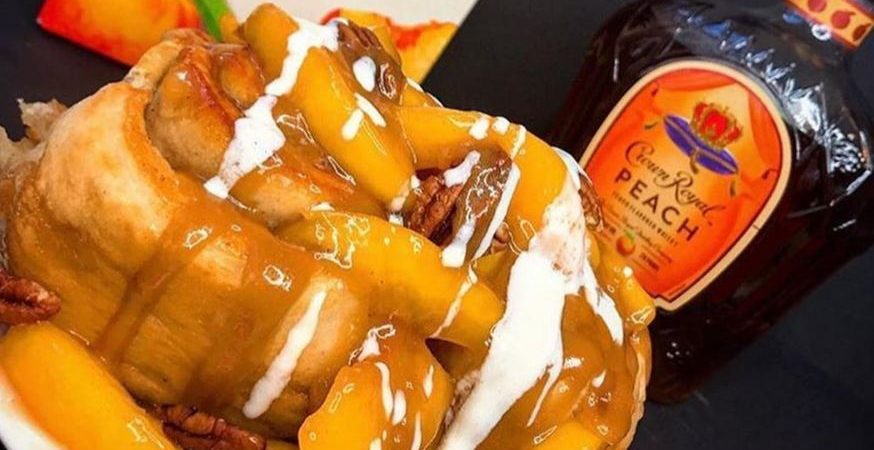 It’s peach time in Texas again and I can just smell the Fredricksburg, Texas peaches all the way in Austin! My favorite liquor of all time is Peach Crown Royal, but it is seasonal just like our Texas peaches, so when it is for sale at Spec’s Liquor Store I buy a whole case and put in my root cellar and guard it with my life. So loving peaches as much as I do I nearly went hog wild when I saw this recipe for Crown Royal Peach Cobbler Cinnamon Rolls because it had all the elements of the things I love the most, fresh peaches cinnamon rolls, and Peach Crown Royal, yum! So I got my ingredients together and made this delicious recipe as fast as I could.

First, Roll Out Your Frozen Pizza Dough Then Spread A Whole Stick Of Real Butter All Over The Dough Surface.

Then Press In The Brown Sugar Down Into The Butter And Dough Then Sprinkle Cinnamon On And Roll Up Then Ct Your Rolls Into Circles.

Then Place Your Cinnamon Rolls Snugly In A Baking Dish.

Then You Make Your Delicious Crown Royal Caramel Sauce By Putting All The Sauce Ingredients Into A Saucepan And Cooking For About 10 To 15 Minutes.

These Crown Royal Peach Cobbler Cinnamon Rolls with Crown Royal Caramel Sauce are so delicious, I know you are going to love them!